In some parts of the world, interest rates have been negative, or mostly negative, for some time now. At one point in 2019, the total value of negative-yielding bonds globally was over $17 trillion. This was initially the result of explicit policies of setting negative interest rates by central banks in Japan and then Europe. But in 2020, amid fears of a deep recession caused by the coronavirus outbreak (COVID-19) and the measures being enacted to control its spread, many global interest rates have dipped even lower. With most short-term U.S. interest rates close to zero now, can negative rates come to the United States … or have they already?

Why did some central banks implement negative rates?

If paying someone for the right to lend them money sounds crazy … it’s because it is! It upends our central understanding of economics.

The ultimate goal of negative rates was to stimulate economic growth. The theory is that lowering interest rates can encourage borrowing, which in turn funds increased economic activity. Simply lowering interest rates, even to zero, had not helped Japan and Europe meet their growth and inflation targets. So they resorted to negative rates to “force” banks to lend, and at much more attractive rates for companies.

Global central banks have also been managing large-scale bond-buying programs that have been driving down longer-term bond yields (sometimes into negative territory). This lowered the debt costs for businesses broadly, increasing their profitability and capacity to take on more debt. The hope was that management would use those higher profits and raise new capital to invest for growth. With a lower cost of capital, the hurdle rate to invest in new projects would now also be lower.

Unfortunately, setting negative short-term rates and buying large amounts of longer-term bonds has not stimulated the economies of Japan and Europe as hoped. There have been momentary green shoots of an economic rebound at times, but a number of factors may have made monetary stimulus less effective overseas:

Negative rates in the United States

Federal Reserve chair Jerome Powell has stated quite strongly that they would not implement a negative interest rate policy here in the United States. But that statement was made before COVID-19. 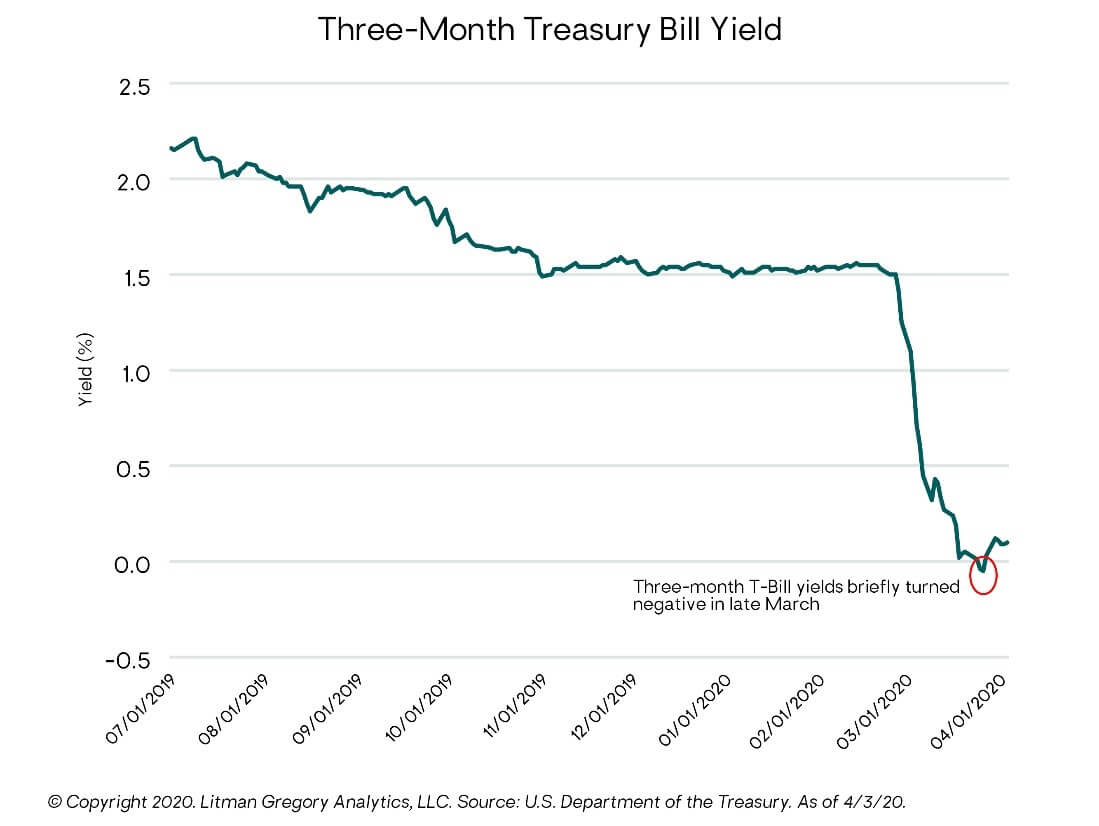 For a moment during the recent market turbulence, the one- and three-month Treasury rates did move into negative territory, though this happened briefly once before a few years back. To be clear, this was not a result of a change in monetary policy. It most likely resulted from investors rushing to safety (i.e., to cash and cash equivalents) amid uncertainty around COVID-19. As the market has rebounded, these yields are now back in positive territory.

It’s important to recognize that the Fed only sets short-term interest rates, which they’ve now dropped close to zero. Markets still set all longer-term interest rates. The Fed can only influence longer-term interest rates indirectly through bond purchases. Though, in the wake of COVID-19, they have committed to purchase an unlimited amount of Treasury bonds, some corporate bonds, and even municipal bonds to keep borrowing costs down and ensure the fluid operation of lending and credit markets.

It’s still too early to say definitively that we will never resort to a negative interest rate policy in the United States or that rates set by markets won’t be influenced by speculation and turn negative again. But the Fed’s unprecedented actions seem to have instilled some level of confidence back into markets.

Our hope is that global monetary authorities and governments continue to work together to cushion the impact of an almost certain global recession; support markets, businesses, and citizens through this tough time; and do everything in their power to prevent a depression-like outcome.

Next
Bond Market Turbulence: The Fed Steps In

Our Perspective and Strategy During Turbulent Times

It’s been a difficult year, to say the least. As September comes to a close, we’ve weathered a disappointing month in the financial markets after a relatively benign August and a strong July. As is the case in any bear market, investors are braced for more to come. In this post we provide a summary on the forces that brought us here, how we’re responding, and what to expect going forward.

With Inflation Rising, Why Have Inflation-Protected Bonds Declined?

As the outlook for inflation turned less “transitory,” treasury inflation-protected securities became interesting to many investors. But these bonds have shown they aren’t immune to broader bond market declines, leaving investors to wonder, “How can my inflation-protected bonds be down when inflation is on the rise?” In this post we explain how these bonds are impacted by different market variables, including inflation, and why we believe they still deserve a place in our client portfolios.

With current yields over 9%, Series I Savings Bonds seem to offer a "free lunch". These bonds are issued by the U.S. Government and pay interest linked to current inflation rates, making them an attractive option for most savers and investors.