This may come as no surprise to investors who know us, but we would be very cautious about buying cryptocurrencies. We are nowhere close to owning them in our client portfolios. There are three broad elements to our skepticism and caution toward bitcoin as an investment.

There is no way we know of to value bitcoin on a fundamental basis. What is its fair value? There are no cash flows or yield associated with bitcoin. That creates a huge hurdle for us to incorporate it into our investment approach, which is first and foremost based on understanding the economic fundamentals and market valuations of each asset class we may own and how the asset is likely to perform in different macroeconomic scenarios.

Turning to the risks, they are numerous and significant, in our view. We’d start with the existential regulatory risk. The Bank Credit Analyst recently wrote about this, arguing: “Bitcoin’s ability to facilitate anonymous transactions is also its Achilles heel. The widespread use of bitcoin would make it more difficult for governments to tax their citizens.” As a result, “Governments will step in to ban or greatly curtail bitcoin’s usage” before it reaches a critical mass as a viable medium of exchange. And as a result, bitcoin’s utility as a “store of value” will disappear.

Just last week, both the United Kingdom’s Financial Conduct Authority and the European Central Bank highlighted the need for more stringent regulatory scrutiny of cryptocurrencies, noting the criminal activity often associated with it.

Based on our current understanding, there are reasonable scenarios where the price of bitcoin, at some point, could go to zero. As a rule, we don’t tend to favor investments that have zero as their downside. 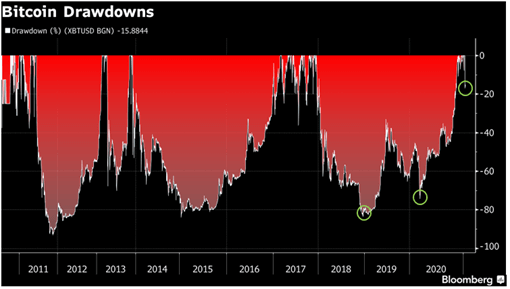 Bitcoin in a word is volatile—extremely volatile—on a day-to-day basis. And it has had massive drawdowns. The chart below tells the story. To mention a few highlights: 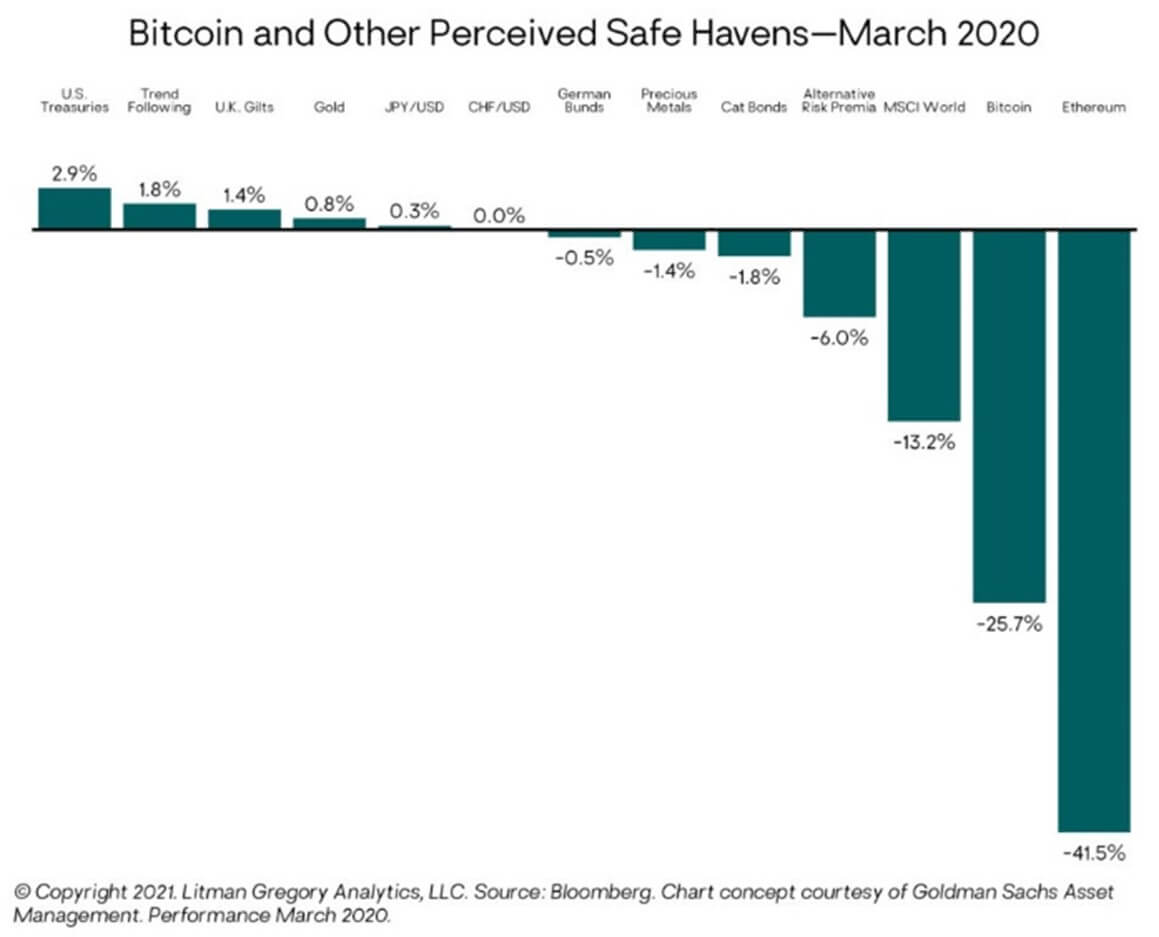 Bitcoin also hasn’t been a consistently good hedge against market shocks or equity bear markets. As the chart below shows, it lost 26% in March 2020 while global stocks dropped 13%. Meanwhile, gold was up 0.8% and U.S. Treasury bonds gained nearly 3%. Even better, our managed futures funds were up 6% to 8%.

So, bitcoin has been behaving more like a speculative “risk-on” asset—correlated with other risk assets like stocks—than a defensive portfolio diversifier.

And many commentators are pointing to its stratospheric rise last year as evidence it is in a bubble.

And that brings us to the behavioral aspects of owning bitcoin. Given its extremely high volatility without an underlying fundamental or valuation-based foundation, it is likely to be an extremely difficult investment for most people to stick with. The potential for getting whipsawed—buying high and then selling low—is extreme with such a volatile and non-fundamentally-driven asset. 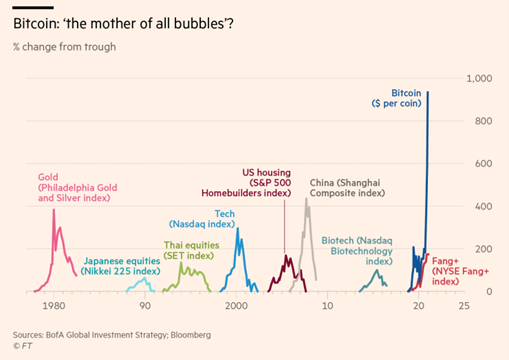 A Speculation, Not an Investment

So, to sum up, our view hasn’t changed from what we wrote three years ago, just as bitcoin was hitting what turned out to be a peak in the frenzy of December 2017. And that is: Buying bitcoin is not investing, it’s speculating.

And speculating can be a fun game for some people with some small portion of their money. But we aren’t hired to speculate with the assets our clients have entrusted to us. And we don’t need to own bitcoin or play the cryptocurrency game to achieve our client’s investment goals.

LGWM is an SEC registered investment adviser with its principal place of business in the state of California. LGWM and its representatives are in compliance with the current registration and notice filing requirements imposed upon registered investment advisers by those states in which LGWM maintains clients. LGWM may only transact business in those states in which it is noticed filed, or qualifies for an exemption or exclusion from notice filing requirements. Any subsequent, direct communication by LGWM with a prospective client shall be conducted by a representative that is either registered or qualifies for an exemption or exclusion from registration in the state where the prospective client resides.

Next
Cryptocurrency Speculation: A Case of FOMO? (Fear of Missing Out)

Though global stock and bond markets saw positive returns during the fourth quarter, the year closed as one of the most difficult and volatile in the financial markets’ recent history. In this year-end commentary, we reflect on this past year and provide our investment outlook for 2023 and beyond. We cover opinions on the potential of recession, inflation and interest rate trends, global stock and bond market valuations, as well as potential return within our economic scenario analyses. We invite you to read this comprehensive review and reach out to your advisor with any questions.

Litman Gregory Advisors In the News

We are proud to have had senior advisors Chris Wheaton and Gretchen Hollstein recently interviewed and quoted by both local and national news publications in stories about investment and charitable planning strategies. In this post we share their quotes and links to the articles.

Through in-depth due diligence that identifies high quality investment vehicles offering potential for long-term capital growth, attractive diversification and lower minimums, we have found effective ways for our clients to take advantage of PE investments.